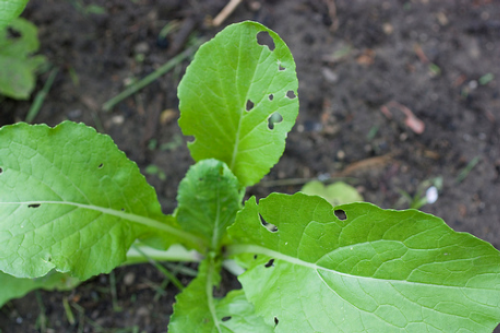 Column 5 Published in the June 30th, 2015 issue of the Warroad Pioneer

I braved the mud of the garden to snip cilantro this evening and noticed that my sorel/kale/arugula/spinach mix has popped up nicely but is as lacy looking as a new bride’s underthings. Something’s been eating my greens!

After dinner, I relished a few quiet moments to read a bit from “Birch Waftings,” a collection of old Warroad Pioneer columns written by Oak Island resident Joyce Newcom in 1969-73. A dear neighbor had loaned it to me just that afternoon. One of the first entries I turned to was an anti-pest recipe: “1 strong onion (or 2 less potent ones) chopped; 4-5 cloves of garlic, crushed; 4 Tbsp cayenne pepper. Bring to a boil in 1 gallon water. Strain. Pour into spray bottle and apply to plants….spray often and watch your garden carefully.”

I’ll be making this tomorrow and likely pinching my nose with a clothespin, as Mrs. Newcom suggests.

“The Angle provides,” my friends and I are often caught saying. Usually it’s in reference to a fabulous dump find at the Angle’s community shopping mall. But just as frequently of late, the Angle has provided in many different ways and even in advance!

Two gargantuan felt display boards came my way after several exchanges of hand a few weeks back. I had no idea how I would put them to use but hung on to them just in case, as any practical Angleite would. That use presented itself shortly thereafter when I needed a medium for the Northerly Park vision board to bring to the Lake of the Woods County Commissioners meeting.

There is a small, small group of devoted residents who are working through a grant application to build the most northern park in the lower 48. We have a grand vision and an even grander bureaucratic slog ahead of us, but we are optimistic. My FYI community outreach about the grant application may or may not be complete before this publishes, so if your lacy underthings have just bunched up, Fear Not. Everyone will have a chance to weigh-in.

That said, our application is due June 30 and we won’t know anything more until late fall. It makes me smile to see that the state government runs on Angle Time as well.

The new airport is all the talk these days. Even a border agent grilled me for several minutes about the Commissioners meeting and the likelihood of it all coming to pass. The car in line behind me surely assumed I was getting the third degree for the muddy state of my vehicle.

Yes, the airport is a reality, moving slowly forward on Angle Time of course—not unlike the grading of our gravel roads—but it is happening. A site has been selected just south of Jim’s Corner, away from most residential areas. We’ll still wake up to the throaty bugle of sandhill cranes instead of the buzz of a twin prop. Our little ones will still point skyward at the anomaly that is a passing aircraft, and we’ll finally have faster access to medical attention when emergencies arise.

Change is the only constant, as Heraclitus said some 2,500 years ago. But at least it happens at a snail’s pace here at the Angle. Even the crankiest of us have time to get used to an idea.

The June rains have not disappointed boaters and gardeners alike. Fishing has been great until the recent lightening, which does something inexplicable to their appetites or just plain spooks them. The bugs seem to have been beaten down a bit by the consistent rains, but I hear a menacing forewarning about the coming month in the ever-present buzz and hum.

Better add extra cayenne and garlic to that lettuce spray.