It has been a tough week to stay positive. Trumpers everywhere are telling us to quit whining and to accept defeat with grace and dignity – in less kind words, of course, and just as they would have if Hillary had won, no doubt.

It was a cruel election season, and though the election is over the cruelty isn’t. It’s as if Trump’s indecency has given anyone who wants it the permission to be just as awful.

An acquaintance found out I was for Hillary and told me because of all the Trump flags and signage he had assumed “The Angle was safe” from the likes of me. A brother called me stupid for voting for her and said he was “pissed-off that I didn’t think like him.” A brother-in-law unleashed a whole smelly stream of vitriol on my Facebook page and when I asked him to take his negativity elsewhere, he flat out refused. He was the first person I unfriended. A sister texted me a propaganda video entitled The Clinton Pedophile Satanic Network with a cover photo of a presumably dead woman smeared in entrails and floating in a tub of blood. A sister-in-law posted dozens of cruel and hateful memes about Hillary Clinton and her supporters – as if there were still voting going on. She was the second person I unfriended.

These are all from what I would have called good, hard-working Christian folk. Golden Rule, much?

Being white, I haven’t been subjected to one of the hundreds of acts of blatant racism and violence happening around the country in the wake of the election.

It is not a good time to be anything other than white, Christian and conservative in this country.

So, fall in line, folks. Support our new president, Dems. Quit whining, bitches. Pull up your big girl britches and get back to work, sweetheart.

My little Hillary yard sign remains. Not because I think she should be president, but because I want everyone to know that I proudly did not vote for what is about to ensue in this country. And because I’m going to hold everyone who voted for him accountable.

If you wanted the wall and for Hillary to be locked up, sorry to disappoint you, but he’s already capitulated on those – just good campaign tactics, no doubt. They made for good rally chants, at the least.

After the election, I listened again to the book “The Four Agreements” by don Miguel Ruiz on my long and lonely daily drive to town. It’s a quick read and an even quicker listen; I highly recommend it for anyone wanting to live with integrity. It helped me remember to have hope in humanity, even the indecent ones, even the cruel ones. 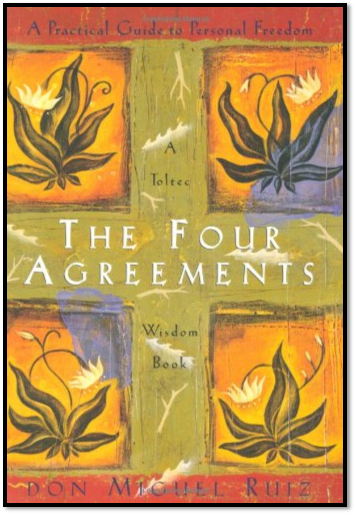 We are diseased, we humans. Sick in the head. We have all made a million little agreements about how to be and how to act. And, all our resulting beliefs stem from a fear that we will be judged for not meeting those millions of agreements. In truth, we are sleeping behind a functioning façade. But we can wake up, and I intend to.

The Four Agreements are:

Speak with integrity. Say only what you mean. Avoid using the Word to speak against yourself or to gossip about others. Use the power of your Word in the direction of truth and love.

Nothing others do is because of you. What others say and do is a projection of their own reality, their own dream. When you are immune to the opinions and actions of others, you won’t be the victim of needless suffering.

Find the courage to ask questions and to express what you really want. Communicate with others as clearly as you can to avoid misunderstandings, sadness and drama. With just this one agreement, you can completely transform your life.

Your best is going to change from moment to moment; it will be different when you are healthy as opposed to sick. Under any circumstance, simply do your best, and you will avoid self-judgment, self-abuse, and regret.

(The above summaries are not my own and I wasn’t able to find proper attribution as they are on numerous sites exactly as written.)

I break these agreements all the time, but with awareness I always come back to them and continue to grow in love and integrity. In a first draft of this column, I had outlined them using Trump as an example of what not to do, but that was not being impeccable with my word. I had to scrap it. I start over all the time.

Trumpers, you squeaked by in a minority victory. More people in this country voted for Hillary than for Trump. Please treat us with respect and dignity. You have extremists in your ranks, as do we. Let’s not judge the whole by the few.

If you voted for Trump, you now have a tremendous responsibility to hold him accountable, as we all do. I wish we could hope for a more presidential man, a man who would live by The Four Agreements, as if he’d magically change from campaign trail to Oval Office. But part of his appeal is “what you see is what you get.” He himself declared that he is very unpredictable, so that’s what we’ll deal with for the next four years. And believe you me, it’s only gonna be four years.

This too shall pass.

(Note: In print, the Pioneer substituted “horrifically graphic” for the phrase “presumably dead woman smeared in entrails and floating in a tub of blood.” They also edited out the profanity from “Quit whining, bitches.”)