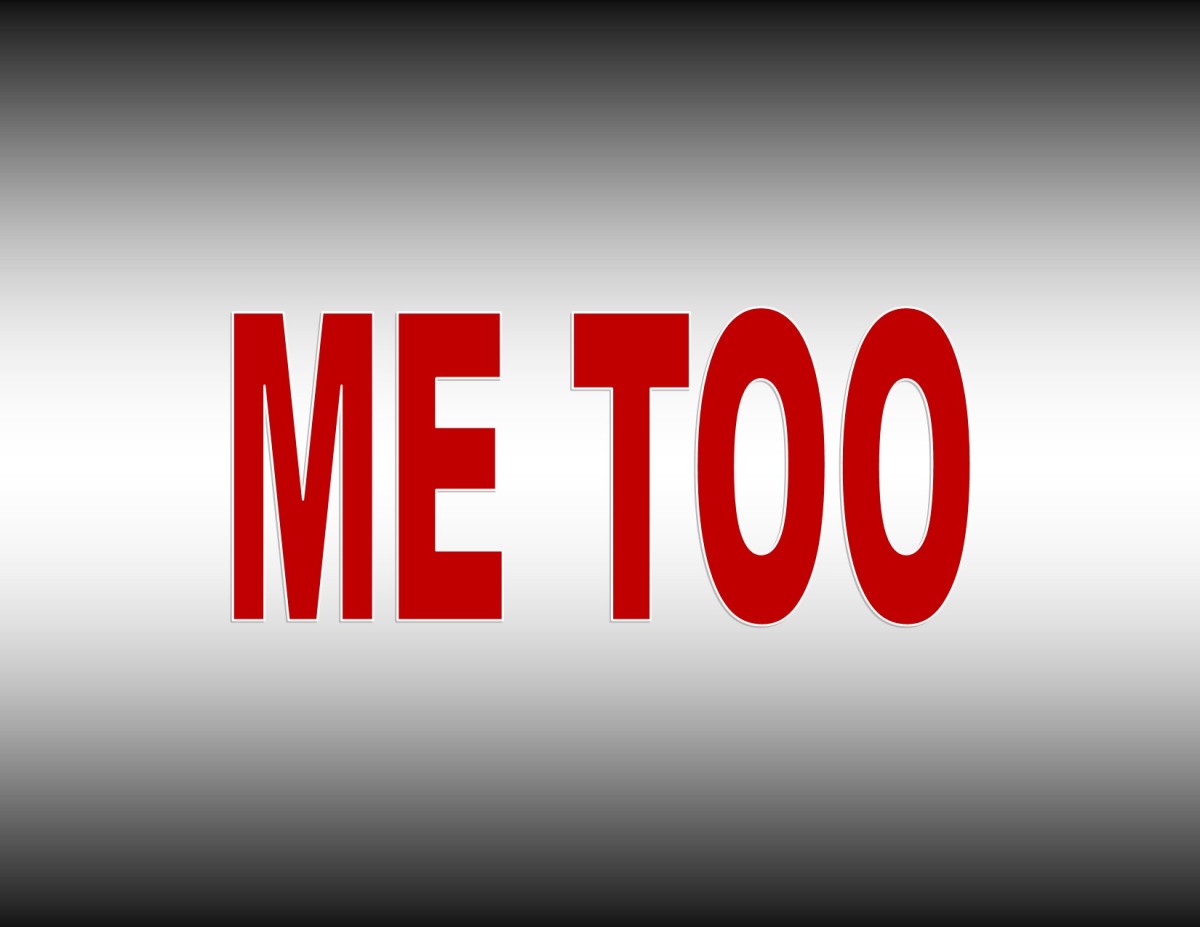 (This is the unedited version. Trigger warning)  I publish this despite my many misgivings and trepidation about its reception in our small, tight-knit community. The brave editors at the Warroad Pioneer worked with me to change the graphic descriptions, edit it for length and they also included the following note – see image. I feel grateful and a certain sense of pride in writing for a rural community paper that doesn’t shy away from issues such as these.

Walking home from middle school one day, I passed a driveway where three men were working on a car. They made some sort of catcall that I didn’t understand, but the intent was clear so I hurried along. After a few minutes, I noticed they were following me. It was a long straight stretch before my neighborhood and I didn’t want to show them my fear, but they were gaining on me and calling out. I was carrying my bookbag and my trumpet, but as soon as I made the turn into my neighborhood, I broke into a dead sprint and about killed myself getting out of site before they could see which house I lived in. I never looked back and have no idea what they did after I ran.

In high school, we had an above-ground pool with an adjacent deck. My friend Denice and I used to lay in the sun for hours, putting Sun-In in our hair and slathering our skin with baby oil. There were three houses adjacent to our fenced back yard, and I remember noticing now and again the fathers of our neighborhood friends out on their second-floor decks. Years later, one of them told us that they would each call the others when we were spotted laying out, like a PTA phone tree. He thought it was so hilarious. We obviously weren’t harmed at the time, but learning about it even a decade afterward felt so invasive and creepy. I had always trusted the neighborhood parents, and it broke something in me to learn that middle-age surburban dads were just like the whistling men on the streets.

At 16, I remember wearing a mini-skirt with tights to school one day. It wasn’t indecent by any means, but I guess it attracted the attention of a group of older boys. My brother happened to be standing nearby, and instead of telling them to knock off the crude comments, he walked over to me and tugged at the hem of my skirt as if to pull it down over my legs. It was clear that I was in the wrong, not them.

When I was 18, I went to work at a small print shop in a neighboring town, and I loved the job. The owners, a married couple, seemed like nice hardworking folks. One day the husband, Tim, announced that there was now an employee bulletin board squared off with each of our names in a space for mail or messages. A week later, he pointed out that an envelope for me had been tacked there several days prior. On my lunch break I opened it to find a two-page mystery letter detailing the author’s attraction to me and how he looked forward to seeing me now and then. I was given instructions to wear my hair long and down – his favorite way – on a certain day as verification that I had received the letter and was interested in knowing who he was.

I was young. Even though it didn’t seem professional, I wore my hair down, as requested, and I looked suspiciously at every man who came in. Another long letter came the next day expressing his delight. It was even more complimentary and mentioned him fantasizing about me. I had no idea who was leaving them. I played along for another letter or two, wearing my hair as the man requested with his promise of revealing himself soon. But the letters quickly devolved into lurid accounts of what he wanted to do to me. He admitted he was married but assured me his wife would understand his attraction to me. He even detailed his fantasies involving both of us. I stopped playing along at that point and took to wearing my hair in a tight strict bun every day to hopefully send a message. Further letters tried to guilt me into wearing my hair his favorite way again and continued the increasingly graphic descriptions of his fantasies.

One night while I was at my second job at Portlandia Pizza down the road, Tim, the print shop owner walked in, smiled at me and said, “I heard this is good place to get a Dr. Pepper.” And right then, I knew it was him. The next day I showed the letters to my mom and she told me never to return. When Tim called to find out why I hadn’t shown up for my shift, I tearfully confronted him. He was remorseful, embarrassed and promised he would make up a legitimate excuse so I didn’t look bad to the other employees for leaving without notice. He also sent me $400 in what I can only assume was hush money. I never saw him again and I burned the letters somewhere along the way.

When I was in my early 20’s, my ex-fiancé took our break-up hard, even though I had suspected him of cheating. He began showing up at my work, leaving things on my car and tapping on my bedroom window late at night. One time he called saying he was up on a mountain with a shotgun in his mouth and his toe on the trigger. I had no idea what to do and don’t even remember how I talked him down.  A different ex at a different time in my life, searched through my garbage looking for condom wrappers or other evidence to see if I had moved on. He later confessed what he had done while trying to win me back.

In my late 20’s, I was in Vegas with a group of friends and my boyfriend at the time. We were headed out onto a crowded dance floor that was so packed everyone was jammed up against each other. A tall man came up behind me and in seconds flat went up my skirt, ripped my panties and penetrated me so violently I gasped in pain. I spun around and grabbed his arm, flailing at him. My boyfriend, who had been leading us through the crowd turned back for me and over the loud music I told him what had happened. The first thing he did was ask the man, “Did you do that?” The guy, of course, denied it, rolled his eyes and shook me off of his arm, disappearing into the crowd. Our relationship didn’t last very long after that.

In my 30’s, I went on a blind date with a man who seemed nice enough. He was big and muscular and said he was an Iraq veteran. We met for drinks and after 1 and ½ rum and diet cokes, I was feeling decidedly off. When I got up to go to the bathroom, I could barely walk. I called a friend who said he would come immediately, and when I got back to the table I asked my date to order me another one. When he was gone at the bar, I grabbed my purse and ran. He followed me out the door and up the street for several blocks yelling at me. Fortunately, my friend came racing up in his car and I scrambled in. At that point I was having a hard time breathing, and he later said I was clawing at my neck. He wanted to take me to the ER, but in my delirium I adamantly refused, worried about how it would look on my insurance. I finally calmed down, drank a ton of water and slept for almost a day.

There are countless instances of being catcalled and honked at, a dozen feeling pressured to dance, three being forcibly kissed, and a thousand walks to and fro feeling scared and unsafe. Men in vehicles next to mine in traffic have made lewd gestures or signaled me to show them my breasts or pull up my skirt. Men have cursed at me and called me names when I wouldn’t respond to them on the street.

It’s all one of the many reasons why I moved to this remote little pocket of our modern world. But even here I’ve experienced men who, like those described above, grew up amidst the conditioning that women are lesser beings and were put here solely for their pleasure, whether we wanted it or not.

I have a terrible time trusting men. I wish it weren’t so, but I don’t know how to change that about me. Perhaps this is my first attempt.

Of course, there are many wonderful men out there who are defenders of women and are feminists in their own right. I tell these stories to ask those men to stand up taller against the ones who demean or objectify women. (I should also say, since I’m being overly truthful, that I feel a certain pressure to mention that there are “goods guys” lest they get pissed off and defensive at being lumped in with the “bad guys.” What does that say about the whole situation?)

Regardless, I lay my war wounds out here because it’s time for me to heal. I tell all because if it gives one man pause which in turn saves one woman one tiny bit of fear or humiliation, then it has served its purpose.

#MeToo, for me, is about revealing the shadows and all the shame that goes with them so I can look them square in the face, forgive, and warrior on.

#MeToo, for all of us, is about Truth arising and humanity becoming better for it.

(Published in the October 31st issue of the Warroad Pioneer)