We all rode to town together on Friday. It’s an hour+ drive, so it’s no small thing. We packed the diaper bag, installed the car seats and rushed through our morning in order to leave by 8AM. The whole way to town, the 6-year old watched her tablet. the 8-month old slept, and Tony and I argued.

Our version of arguing is about two exchanges back and forth and then raging silence for the rest of the trip. I stare out the window and talk myself down and he sits in his own frustration at my anger. He only ever seems to get angry at my anger, nothing else.

I had asked him if we could go through his completed reminders on his phone while we drove so I could write down what needs to be billed for.  His exasperated response was, “Right now?”

In addition to being a contract driver for UPS, Tony hauls freight for local businesses and runs miscellaneous errands for individuals around our community. “Town” is a half-day commitment and over 120 miles roundtrip. Since we’re going for the UPS already, we can save people a lot of time and money by picking up their items for them. And then we bill a nominal amount for providing the service.

I ask him almost weekly, “Are you writing things down?”

“Are you using the book I got you to keep track?”

“Text me your errands and I’ll write them down.”

I’m grateful he’s generous. I’m glad his kindness is balanced with my “unkindness”, but we’re trying to run a business. Every errand costs him both gas money and time, which is even more valuable considering it takes him away from his family and our projects. He often makes special errand trips to a neighboring town, an extra 20 miles plus 30 minutes, and doesn’t write down that either. He also frequently has to deliver these errands by boat on the lake, which is an additional expense out of pocket. Some folks hand him cash when he arrives, but most expect to be billed.

I do the billing. I am already a month late in billing for the first half of the year. (We only bill twice a year because otherwise I’d be sending out bills for $5 or $15 every month. I let them accumulate for 6 months at a time for my own sanity’s sake.)

The argument was the same one we always have. Tony can’t seem to write down his errands and I don’t want him giving away his time for free. It’s beyond frustrating to me.

So, there we were. Silently arguing on the drive to town, both staring straight ahead, sulking in our own self-righteousness. I decided to use Byron Katie’s “The Work” to help me control my anger and analyze my belief that Tony was putting everyone else first instead of his family. There’s an app for that now, funny enough. I walked through what I thought was the truth and saw that there might be other ways to look at it. I saw that I wouldn’t be able to find a solution if I held to my anger. I saw that I don’t like who I am when I react in anger. It helped.

My seething was slowly calming down when I looked up and saw a slow-moving animal up ahead. It didn’t take but a moment for it to register that it was a porcupine. Tony slowed momentarily and we both watched it in fascination. I see a porcupine only about once a year, maybe twice, and being the interesting creatures that they are, my thoughts then stay with them for quite a long while.

I think about the protection laws and why they exist. It being one of the only animals a person can outrun, I think about their soft underbelly and wonder if I could really club one to death and eat it raw if I were lost and starving. I think about the quill run-ins various animals must suffer through. Invariably I think about the time I stopped my truck and pulled quills from a porcupine that had been run over, the strange looks I got as vehicles passed, and the inspiration for Road Quill Accessories. I’ve made a lot of different jewelry pieces from those quills that would have otherwise rotted in the ditch.

I think about the time I stuck my hand in my sweatshirt pockets and felt a stabbing pain. A quill had worked its way through the fabric lying in wait until it lodged itself in my knuckle skin. There are a ton of microscopic barbs on each quill and it was not fun pulling it out. I think about the porcupine I saw at the very top of a tamarack tree busily chowing down completely oblivious to anything else. It’s as if no one or nothing else exists to them until they’re confronted. 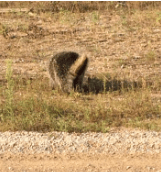 This particular guy, he was waddling as fast as he could, which isn’t fast, to get across the road. He never once looked up or back at us. They seem to always be in their own universe, these pointy yet cute little beasts. Just I suppose as I had been in mine, pointed and angry, so right and justified I felt in my arguments about the billing.

The porcupine walked away into the high grass, our vehicle sped on, and Tony and I looked at each other briefly, both of our mouths slightly upturned.

And that was it, the anger was gone. We smiled together at a porcupine crossing the road and we were back to rights again. I looked over, reached for his hand and said, “I’ll research some different solutions. Maybe there’s an app that will let us share lists so you don’t have to write anything down. It’ll be on me.”

“Thanks,” he said quietly. “Some days just get really busy.”

2 thoughts on “Why Did the Porcupine Cross the Road?”